I was off work last week, in part for a break and in part to look after my school age son during school holidays. The week was a mix of things each of us wanted to do. One of my choices was a trip to Palmerston North for a pilgrimage of sorts to visit my mother’s grave. It’s twenty-five years since she passed away so it was an anniversary that needed marking. My brother came along, and both my sons. My boys rose to the occasion and decorated her headstone with found, lost and stolen plastic flowers from around the cemetery. They did her proud. Afterwards, thanks to a detour leaving the cemetery, we got lost, here: 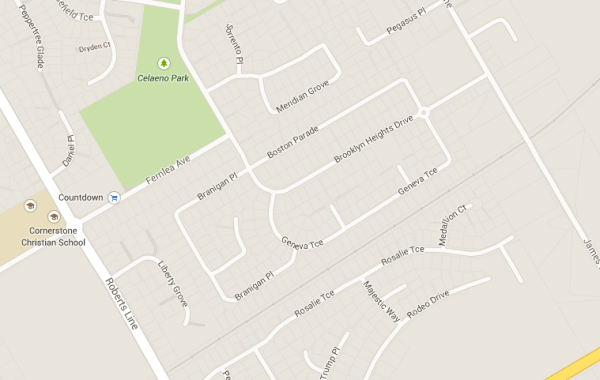 I grew up in Palmerston North but this area is new since my time there. It used to be the bit of farmland before you got to the cemetery; the farmland that was being broken into small lifestyle blocks; the blocks that people were shifting the city’s colonial villas into. Now it’s a sprawl called Kelvin Grove, which is even harder to drive through than the map suggests.

It’s not like the Palmerston North that I grew up in – that city was flat and conforming to a neat grid of parallel and perpendicular streets. With one eye on the hills in the east and enough left and right turns you could navigate across the city without hassle. It was designed to make it easy to get in and out of. Here, those rules don’t apply. It’s all curved roads, crescents that look like cul-de-sacs, and streets looping back on themselves. The trick of navigation here relies on going in the direction that most other cars are traveling. That’s how we found our way out.

Two days later we were at Te Papa, this time with my son and a school friend. Usually when I’m at Te Papa it’s with my school age son and his pre-school brother. It’s an age gap of just under five years, which leads to a fairly unsatisfactory experience for everyone. With two kids the same age, a shared set of interests and sense of purpose, Te Papa is a whole new experience. We covered at least half of the museum; they led and explored, I followed and kept a casual eye on them. There were bits I’d seen often enough – the squid, the bush, discovery centres, the earthquake house – but for the first time in ages I found myself in the Blood and Fire section.

It’s a funny place to end up in. It’s one of the few exhibition areas on the third floor and is accessed across a bridge. I’ve never found the entrance enticing and have often assumed it’s associated with the exhibition area next door. But it’s classic museum fodder in a way that Te Papa’s second floor and much of the fourth floor isn’t. I felt oddly comforted by its simple display of objects, showing rather than telling. And cabinets – it has cabinets!

I’d tweeted earlier that I was at Te Papa and included a photo of my son running. 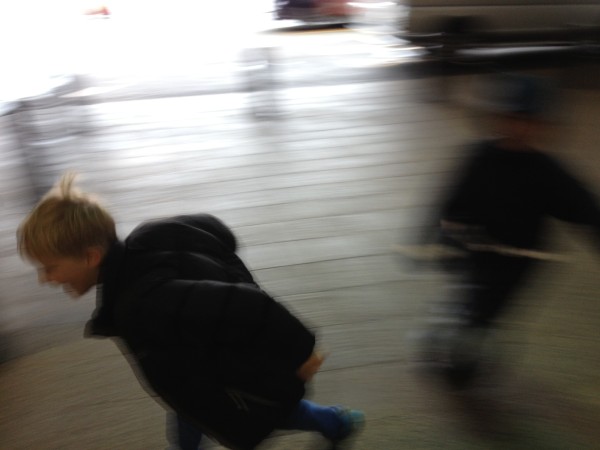 A friend from Te Papa had replied, ‘NO RUNNING!’, to which another friend replied and suggested that Te Papa take possession of this…

@Te_Papa replied at that point that they couldn’t think of a space long enough for running like that and it’s true, there aren’t many long straight lines at Te Papa. I found one: 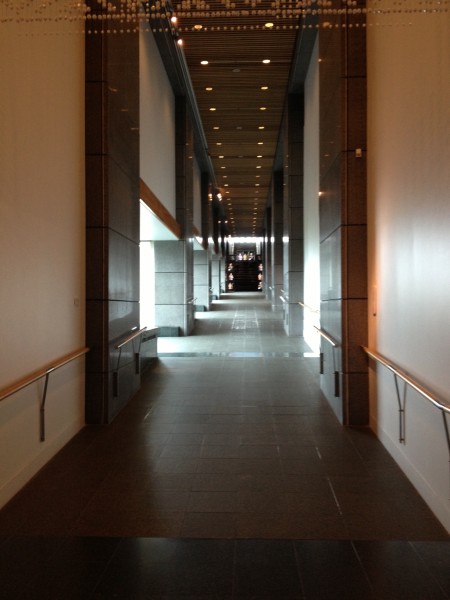 This is probably one of my favourite spaces in the building. There are only a handful of works to see as you make your way up Te Ara ā Hine but there’s a strong sense of movement and progression, of getting somewhere and working your way through a space. There’s a real strength to that feeling of being part of the story that you’re moving through. A big part of that for me is having clear sight lines, being able to see where you’re heading and where you’ve been and feel the scale and scope of what you’re inside.

Nowhere else in Te Papa does that feeling exist for me, with the possible exception of some of the larger spaces in the Ngā Toi space on level five. Everywhere else feels a bit like that suburb in Palmerston North of curved roads, crescents and cul-de-sacs, and looping streets. Once you’re inside an exhibition space, you’re forever looping back on yourself, or meeting a dead-end, but never really getting a sense of where in a narrative you are. For me it’s a building that’s very hard to gain a sense of how it fits together and how the pieces relate to each other and the building as a whole.

I don’t want to be a bagger of Te Papa as I know it’s doing some great work, but I do feel like a national museum needs some kind of monumentalism and grandeur. But perhaps more than that I’d like to understand why spatial planners have eschewed straight lines for curves; ease of egress for complicated ‘organic’ shapes; and spaces that lead nowhere.

Is there something to do with better social cohesion in city planning? Or is it the opposite – does it make communities harder to organize and therefore more docile? In a museum, is the straight line too linear, and being linear suggest an allegiance to grand narrative? Grand narratives and their reliance on accepted tales of winners and losers is hardly the way history is told at a national level anymore. By replacing the linear with the curve, is Te Papa telling a different story, or at least giving the appearance of doing so? Is history becoming more lively or docile as a result?

I’m probably being a stick-in-the-mud and showing my age or conventional devotion to straight lines, rectilinear forms, right angles, and a desire for stories with a simple beginning, middle and end. But it’s also that idea that there’s a large story being told, admittedly with intricacies and small stories woven through, but one that includes all that and maintains a narrative that compels you to keep following the paths and tales they tell. From all those paths you can see where you are in the story, you can get a sense of its scale and size, but as importantly you’re able to interpret how and why an institution is telling you that version of the story. Too many cul-de-sacs just leave me wondering how much of the story I’m missing.