These are my son’s legs. Like other 7-year-olds, and younger too, he’s learnt the trick of climbing up to the biscuit cupboard. He’s standing on the same red stool I used years ago, different city, different house, different time.

Weirdly this stool has become one of the strongest links I have with my childhood and mother.

It was our kitchen stool. She’d sit at the kitchen table in our old house, peeling fruit or mincing breadcrumbs (I can’t remember what for) or left-over roast for rissoles. She spent a lot of time in that kitchen; endless cooking, baking, making preserves. Or she was at the piano. Or out, doing good.

I’m glad I’ve got the red stool to remember her by.

I have a friend who wears suits all the time*. He looks sharp and they suit him (no pun intended). He’s also a fine critic of men’s fashion.

I often think of wearing suits, and in the past have thought each time I’ve taken on a new job that this will be my time to start wearing them. I’ve owned a few, and currently own one, and do like wearing it on occassion. But wearing them every day is something I’ve never managed. I tend to think that if I could afford good suits, really really good ones, and quite a few of them at that (perhaps six?), I’d take to it.

I’ll never do that but it’s a nice idea.

*PS: go see his show as part of the Fringe Festival in February and March 2013. 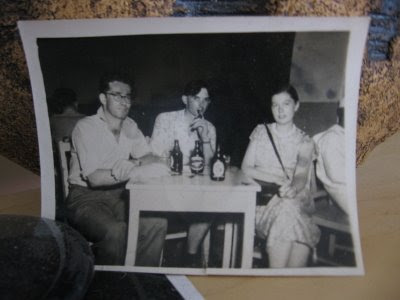 This is one of my favourite photos of my parents. I’ve got others, one in the back of a taxi after getting married, another of mum in her early twenties that sits on the microwave and keeps an eye on me in the kitchen. Those are all taken before they left for Oxford. According to my sister dad said to mum: Come with me now or lose me forever. She went, leaving her nursing training behind. I wish now I’d asked her whether the story was true. This picture though is on the way to England, on that long slow boat trip that took them through the canal at Panama. This is Panama and they’ve stopped long enough to wander round the city and stop in for a beer. Their close friend Pat Wilson is on the left; the photographer is unknown.

Through my mother I can follow my New Zealand roots back to my great great grandfather, John Octavius Batchelar, and to a great grandfather whose name I can’t recall, other than the surname Nielsen. The former arrived in Wanganui around 1870 before ending up in Palmerston North running the Royal Hotel. Making money there meant he could buy land, precious land, on the banks of the Manawatu. Not one of the great early settlers; but good enough to be part of the Wellington-Manawatu rail company that effectively killed Foxton when the main trunk line came though Palmerston rather than Foxton. And good enough for the research centre that sits on his old land near Massey University to be named after him.

On the other side, my unnamed great grandfather came out with the Norwegian settlers who cleared the bush on the other side of the ranges. Of all things for a Norwegian to be, he was the Methodist minister at Norsewood. His tenure came to an end when his church joined with the wider New Zealand Methodist church. He was told to preach to his Norwegian congregation in English, a language many of them couldn’t understand. Family lore goes that he went slowly mad living just outside Palmerston North somewhere on Napier Road.

My grandma, Elsie Mary Laurenson, mum’s mother, was born to one of the eldest of John Octavius’ daughters and was only a few years younger than some of her uncles. Growing up in Thorndon, Wellington, around the time of the 1913 waterfront strike, she was under strict instructions not to acknowledge her uncles should she see them in the streets as members of Massey’s cossacks. I’d like to say this was anti-cossack sentiments on the part of her parents, but no, it was pure self-preservation and fear of worker reprisals.

Her marriage to David Marcus Isaiah Nielsen was his second. She was a dead-ringer for her dead predecessor. Unknown to Elsie, David carried a photo of his first wife in his wallet until he died, when she found it. Not unusual, I’ve heard, for a man to re-marry a similar looking woman but it was too much for his son from the first marriage: committed, never seen again.

The photo sits unframed on the bookshelf. Dad, with pipe, is in shorts; that may be the reason they’re in a bar and not a restaurant. But they’re young and happy, on the way to a new life in an old country, drinking beer in the hot equator city, sharing time with a friend they’ll never lose. Feilding, Danniverke, Wellington, Te Kuiti, Christchurch – small towns of birth and upbringing, entering the world – behind them at least for now.

It was two buses across town every Sunday afternoon, delivering the daughter, her husband, and their two young boys to her parent’s house in St Albans. Her father, a clerk of works, had inspected their house in Hoon Hay, deemed it worth buying. Disaster, financial, ensued when the foundations sank in the soft soil. A young couple, two kids and more on the way, and a sunken house.

Not like the house in St Albans. Two hours every week visiting that house (neat as a pin, and the garden, everything in its place). Not a place for two young boys, two hours a week. Two buses home, the daughter chastised no doubt, made to feel her faults, the son-in-law his shortcomings, and the boys – their boisterousness frowned.

Before her first child, another country, an older city, she sang in the choir at St Mary’s on the High Street. I’d go there some lunchtimes, years later, and light a candle or two, burning thoughts of life and death. It was high enough for candles. She sang Bach’s Mass in B Minor in the Bach Choir, unnerved by the other singers’ choral training and sight-reading.

It was in Christchurch they joined the Church. You know, the Church. Incense, candles, even a pope. In part it was the fashion – Baxter had gone that way. But in part it was some sort of statement about those trips across town every Sunday, the cold Methodism of both their parents.

I never met Dad’s father, Granddad. He was the second man in Feilding to sign up for the first world war. The first – his best mate – died at Gallipoli. He survived that, and the rest of the war, through perhaps luck and poor health. The latter saw him convalescing in Cornwall where he met my nana and proposed. Beguiled by the uniform she accepted: a middle class lass from Truro, daughter of a shopkeeper no less, marrying a farm labourer from Fraddon near Indian Queens.

Dad is the youngest of three: a sister five years his senior, and a brother (late) two or three years older. Nana sent them all to school with homemade pasties, sometimes meat but usually fruit, apple. Baked fresh. They were the envy of the school. There’d be a sandwich and cake too, all wrapped in paper then (and it made my dad cringe) bundled up in a checked cloth. She knew how things should be.

At the end of the war, Granddad joined the march into Cologne to start the rebuilding process, one of the few to see the start and end of the Great War.

My dad grew up in a place called Makino. Nowadays it’s part of Feilding, on the north side of town with Makino Road and the Main Trunk Line running through the middle. Back then it was three houses, and everyone knew each other.

There were gum trees and poplars and arum lilies growing in the paddocks. Dad thought all these plants were native, or not so much native as just part of the landscape. There was no native and no exotic. The houses huddled around the Pakeha Brand Butter dairy factory. A few houses and a dairy factory; that was about it.

Dad was a member of the local cubs. I find that kind of surprising given his left-wing upbringing but the left politics and childhood militarism aren’t totally exclusive. (His father was active in local Labour politics and was one of the first to sign up in Feilding for the first world war.)

The cubs were in town. The movies were in town. Everything was in town. He remembers cold winter nights coming home from town, picking out lampposts to run between. He’d cover three lampposts at a run, then walk a lamppost, then run another three. That’s how he covered the two miles home from cubs or a movie in town.

Last time he can remember running was a decade ago when he still had an office and a desk and a stationary cupboard on Lambton Quay. In his seventies, he tried to run for a bus, but his legs forgot to keep up with his body. He stayed on his feet but missed the bus.

I’m getting obsessed with running at the moment, as anyone close to me knows. Something I know is that for people not doing it, running’s a dull subject. Conversations with my dad remind me again and again of his deep interest in the lives of people around him and his ability to personalise his response to them. It’s a quality I hope I’ve inherited.