This is the talk I gave at my Dad’s funeral last year, in Wellington at Old St Paul’s, on 18 September. He’d died two days before in the early hours of Wednesday morning, 16 September. 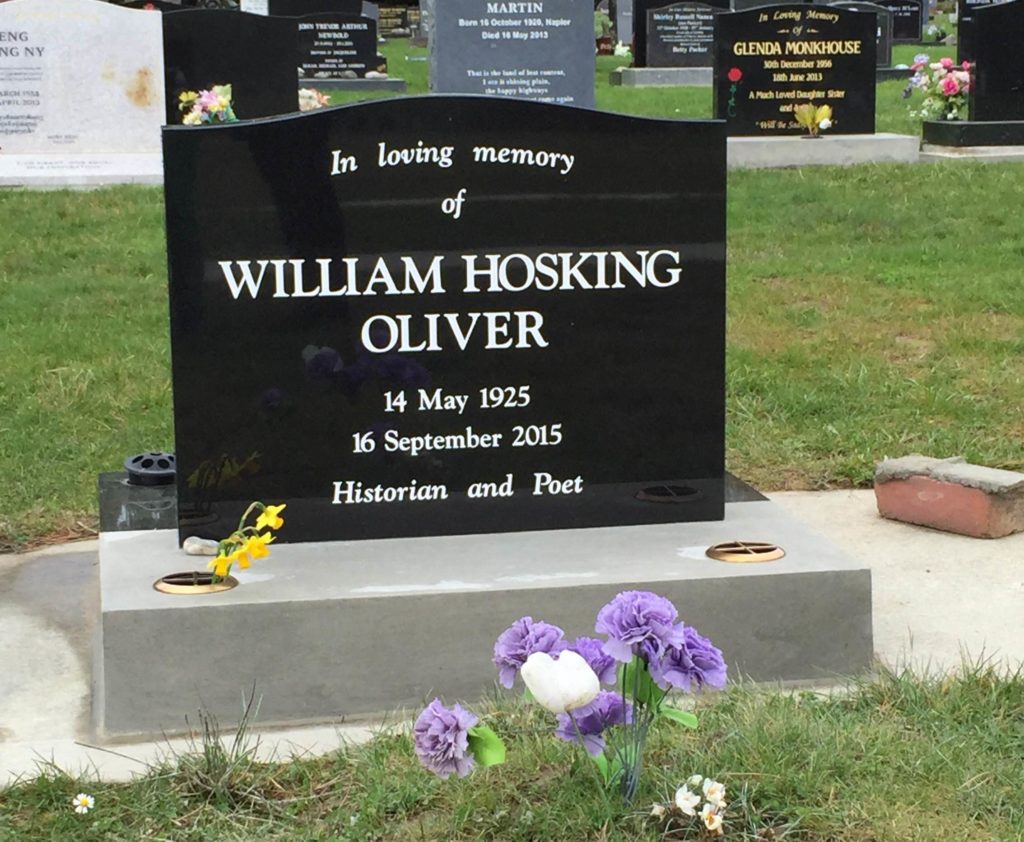 I’m going to talk about Manawatu mud. When my sister got married Dad spoke, eloquently of course, of the Manawatu mud from which that marriage had sprung. Both my sister Liz and her husband Wayne were born and bred Palmerston North, and in Liz’s case it was a long lineage.

Dad, born in Makino just outside Fielding, was Manawatu stock. Even when the family moved to Danniverke in his high school years, he still wasn’t far from the source of the Manawatu river.

Makino was hugely present in the conversations we’ve had over the last few years. Three small houses clustered around a dairy factory, the walk from town after dark when he’d run one lamppost, walk another, to get home, his realisation later that the countryside of poplars, paddocks and lillies wasn’t native to this land.

He shared the house with his parents, William Henry and Ethel Amelia, and siblings Margaret (or Peg) and John (known to many as Jack). It’s lovely to see so many of Peg and Jack’s family here; he treasured those relationships despite distance, both physical and at times emotional. It gave him immense pleasure to know Peg and Jack more closely in later life.

Links to his parents’ Cornish origins were never far away. His father lapsed into a broad Cornish accent when with Cornish friends, who knew him as Har. Dad and his brother John shared a middle name, the old Cornish family name of Hosking. It was a futile attempt on Ethel’s part to keep their memory alive with the wealthier Cornish cousins in the hope they might inherit something.

Dad created his own larger family. He married Dorothy Nielsen, a descendant of early Palmerston North and Norsewood settlers, in 1951. They’d met earlier at young Methodists conference in I think Christshurch. Methodism was their first but not last denomination, moving through Catholicism and Anglicanism together.

Over the next 20 years or so 6 children arrived – John, Steven, Hugh, Thomas, Liz and Matthew – so many in fact that at times he had trouble remembering who was who. He once called me John Steven Hugh Thomas Liz Matt? Matt! And from there further generations of children too numerous to name, but here today, have sprung.

Mum passed away in 1988 after a brief fight against cancer. It was a time of reconciliation for them both after some years of unofficial separation. He was at her bedside when she died, a sunny spring Sunday afternoon, proofs of Dictionary entries on his lap.

He always wanted reconciliation in his personal and professional life. Some things were mended, some weren’t. In looking back on his own life, he regretted some things, and gently accepted others. I hope he died at peace with the life he’d lived, as he should.

He was deeply committed to his public life. One of the oddities for family when a public figure dies is seeing a person’s life more sharply through the eyes of others. Many kind emails have been sent, and we thank you all for your thoughts. One message from Jock Phillips talked of Dad as a real inspiration to younger historians, thought provoking and a ‘lyrical writer’ who showed that ‘writing history about this country could be a literary as well as a historical contribution’. Others have expressed similar sentiments.

It’s an odd feeling to reconcile that with the private figure, the man who spent Saturday afternoons half asleep in front of the TV, half watching provincial rugby. The man who could cook a mince dish with no regard to what he was putting in it – fish sauce of all things – and who lured me away from vegetarianism with lightly cooked fillet steaks!

When I was living with him in Thorndon, we’d spend evenings watching Shortland Street, quickly flicking the channel at 7.30 for Coronation St. Most of the time we were both asleep in our armchairs, he with the broken legged cat, Pusca, on his lap. My partner Madeleine was there sometimes too, sitting bewildered on the sofa as her boyfriend and one of the country’s leading historians nodded off in front of the soaps.

He provided three bits of advice that I can remember, most of which I’ve lived by. The first was his attempt at sex education when I was a teenager. I won’t repeat it here. The second, and I’ve quoted it to some of you, was his approach to correspondence when he was at Massey – in short, if it’s important someone will write twice. The implication was not to answer anything first time round.

He told me recently he interviewed for a job in Australia and when asked about his approach to the demands of administration he replied that if you leave it long enough it will either resolve itself or go away. He didn’t get that job.

The other I’ve taken more seriously and that’s that you should always know where you want to get to and gently and quietly always be moving in that direction. I think it reflects his approach to so much in life. He wasn’t a revolutionary in any sense, despite being called a rabid socialist once in parliament. Not a revolutionary but always committed to changing things for the better.

He despaired in recent years at the state of the world, the state of the Labour Party after last year’s election, computers, social media, society, economy. They were all things he took an interest in whether he knew much about them or not. Any idea his family or friends brought to him he’d entertain, ponder, offer a considered thought. But regardless of despair or otherwise, he left what part of the world he could affect in a better state than he found it.

Returning to the Manawatu mud, I think of the old house in Church St. Of all the towns and cities and houses that Dad and Mum lived in, 114 Church St was the only place where the whole family lived. A big rambling turn of the century villa; an even bigger and ramblier garden. The neighbours thought we were fairly mad. They worried our pine trees would fall on their houses, complained of the shadows cast by the trees, or that tree roots would damage their concrete driveways.

We didn’t mow the grass verge often enough, despite Dad cutting a fine figure in denim shorts, purple teeshirt and bata bullets, pushing the Massport Tornado up and down. The last straw of our family’s sanity was broken when we built a corrugated iron fence along the front of the macrocarpa hedge, complete with holes cut in the iron for the hedge to grow through. It was a childhood I’ll never forget and I’ll treasure the memories of dad, mum, my brothers and my sister at 114.

The funny thing about when a writer dies is there’s no shortage of material to use in speeches like this. I’ll read now a poem by dad about that house in Palmerston.

Night sounds: the old house settles,
a nail thrums through the floor,
a child calls sharply, a bird
cries out once only. Silence
climbs on a wave of small sounds,
a distant car, a far dog barking,
the pulse of an electric guitar.
The sounds of the day linger,
voices of children, the march
of a fugue, the boom of rock,
a car at speed on the straight.
Old house, you are close to your end,
you do well to fall silent.
Remember the clip-clop of hooves,
wheels brisk through the gravel,
children and birds in the trees,
fingers finding the keys,
the swarthy baritone in full
voice proclaiming I dreamt I dwelt…
The sounds have sunk to a sigh.