I’m signed up for the Wellington Round the Bays half marathon in late February so I’ve been following their Twitter feed at Wgtnroundthebay. They’re doing a great job of tweeting training tips and encouragement to participants, especially the new runners. They’re also getting active with heaps of other tweeters, both in the running and local communities.

One of the tweeters I came across thanks to them is seedouglasrun who’s organising a virtual #TwitterRoadRace. It’s a nice example of using Twitter to build a quick community around a one-off event, where participants sign-up online for a 5k race that they run anywhere on Saturday 21 January 2012. It’s similar to some of the virtual/real runs and events that Nike organise but without the taint of corporate backing. Details available at Doug Cassaro’s blog, I run because….

Something I’m keen to see from future race organisers is for them to collect Twitter handles as part of race registration and then live tweet runners’ preliminary results on race day. Would create a great online buzz for the event and give runners something to smile about while they wait for their official time.

I’ve read a couple of good posts about barefoot running recently, one pro-barefoot from the NYTimes and another, more neutral view on the Science of Sports.

It’s an attractive idea, barefoot; it’s natural, surely, that’s how we used to run and it’s how kids still move for a lot of their early years. And the highly structured shoes we currently run in are a recent invention, less than half a century old. (Witness any number of twentieth century runners run in little more than plimsoles, including New Zealand’s own Arthur Lydiard).

But it ain’t all simple. Most adults in the western world have been in shoes for most of their lives. We’re lazy, we sit at desks, we watch too much tv. There’s not much that’s genuinely ‘natural’ about our lives anymore, whatever natural is. What I like perhaps most about barefoot is the idea that running is light, bouncy and graceful, and not at all macho. Makes running a pretty good antidote to most male sport in New Zealand.

Good stuff to think about, especially concepts of being natural compared to our bodies’ ‘natural’ tendency to adaption. For me, I’ll be buying some neutral lightweight shoes soon to replace my current motion-control shoes.

Going to run the Wellington marathon again this year. Have been quiet on the running since our second son arrived in August; and quiet on the blogging since I got a Garmin GPS watch. So it’s all logged and graphed and mapped to death over here.

Ran a half recently around the Wellington bays in 1:39:30. A slight improvement on the last half, and not bad given the lack of focused training. Should be able to go under 3:30 for the full marathon if I can stick to the training and avoid injury. Using Matt Fitzgerald’s beginners programme on top of regular commute runs into work. (It’s about 7k one way and I’m trying to do it five or six times a week.) 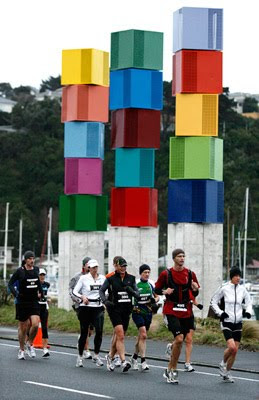 So at last I managed to run a marathon. It’s been no easy run, to make a pun, but on Sunday 27 June 2010 in a howling Wellington southerly I ran my first marathon, the Harbour Capital, in 3 hours and 47 minutes.

It was a far cry from my aim of 3:30, but with calf strains in both legs over the last few months and something dodgy with the tendons in my left ankle (all the way up to my hip at times), the training went fairly pear-shaped towards the end. Add to that my fall-back position of eating too much sugary fat and I was over optimistic to aim for 3:30.

So in the end, and with the rain coming down at the start, I revised expectations and aimed to finish. I also took on board advice from a good friend and keen runner to be careful at the 10km marker not to let loose. The worry at 10km is that you’re feeling good and you let yourself speed up. As it happened, I was running with a group at that point all of whom sped up and gradually left me behind. But I kept on going and slowly over the second half of the race overtook at least a few of them.

I felt in fact pretty damn good and managed to enjoy the last 7km – I’d never run that far before and I was passing people all the way. Maybe that suggests I hadn’t pushed myself enough, but for a first time out it was a good introduction. I’ll be doing more, and aiming again for that 3:30.

Pic: me, far left, at about the 9km mark; taken from the Dominion Post, 27 June 2010, page 3 (see the second picture in this story in the online edition)

So, it’s been a quiet last month on the running and blogging, but perhaps it’s safe to say that I’m on the mend from the calf strain. Physio released me last week, but not without plenty of stretching, thigh and glute strengthening, and balance exercises (the latter especially round the ankle). Her take on what caused it was a combination of too much crossing over and using a front-foot strike.

I’ll concede two out of three: yes my feet were crossing over a lot, and yes I was using a front-foot strike, but the front-foot strike isn’t bad in itself, but it might be bad if you switch to it too quickly or don’t have the bio-mechanical strength to support it. So I’m now back to a heel-to-mid-foot strike, which is feeling ok so far. Picking up the distances over the last couple of weeks and finding a 5-minute kilometre is currently pretty standard. Done quite a few 10km runs, some 12, and a 16 on Sunday.

Thinking now about the Harbour Capital run at the end of June; do I aim to do a faster half-marathon time or try to train for the full marathon? Is it too late to aim for the marathon? Maybe if I take the Hal Higdon novice approach and just aim to finish I could do it. It’s about the last real chance to run a decent-sized marathon before the 40th birthday… The full marathon is the tempting option.

Ran 28km today, longest run ever for me. Exhausting. And probably wouldn’t have made it without the constant ministrations from my running partner: Powerade, water, oaty bars. Took 2:36; big jump up from last longest run of just 3km less. Rest day tomorrow and recovering at the moment with TV and beer.